The Third Annual St Bede Liturgy Lecture will be given by The Rt Rev. Cuthbert Brogan, Abbot of Farnborough, on Saturday 6 July 2013, at Farnborough Abbey – by invitation only 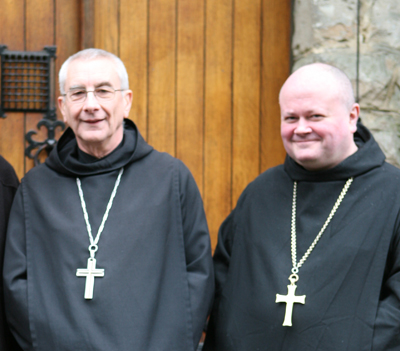 Abbot Cuthbert will speak on actuosa participatio, departing from the phrase of the Dogmatic Constitution on the Liturgy of the Second Vatican Council, Sacrosanctum Concilium 14:

“Mother Church earnestly desires that all the faithful should be led to that fully conscious, and active participation in liturgical celebrations which is demanded by the very nature of the liturgy. Such participation by the Christian people as ‘a chosen race, a royal priesthood, a holy nation, a redeemed people’ (1 Pet. 2:9; cf. 2:4-5), is their right and duty by reason of their baptism”.

The monastic community will host the event and provide an occasion to visit the grave of their first Abbot Dom Cabrol, the author of the Dictionnaire d’archéologie chrétienne et de liturgie; and the graves of Dom Villecourt, Dom Férotin, Dom Baudot and Dom Gougaud all great liturgical scholars of this community.

The Second Annual St Bede Liturgy Lecture was given by The Most Rev. Arthur Roche, Archbishop Secretary of the Sacred Congregation of Divine Worship, on Saturday 14 July 2012, Ealing Abbey. Archbishop Roche spoke on the phrase from the Dogmatic Constitution on the Liturgy of the Second Vatican Council, Sacrosanctum Concilium 8: “In terrena Liturgia caelestem illam praegustando participamus” : “In the earthly liturgy we take part in a foretaste of that heavenly liturgy” (tr. Austin Flannery). His talk is projected to be published in Questions Liturgiques: Studies in Liturgy. An initial report is expected to appear in The Tablet of London.

The first annual St Bede Liturgy Lecture given in 2011 by Fr Ephrem Carr, President of the Pontifical Liturgical Institute, Sant’Anselmo, is now available as, “Sacrosanctum concilium and its Consequences: The Reform of the Liturgy”, Questions Liturgiques: Studies in Liturgy 92 (2011) 183-194.