Listen to the Word 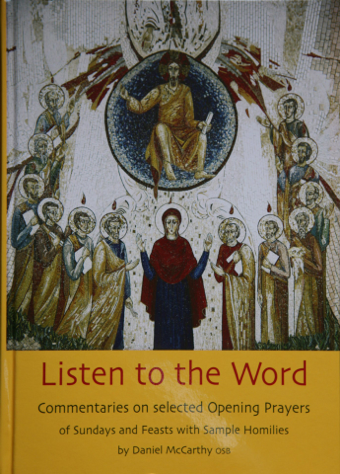 The opening prayer or collect has received little notice in the reform of the liturgy, although the scholarship behind it is as solid as its tradition is broad and profound. This brief prayer beguiles with brevity and apparent simplicity, and we too easily shy away from the rewarding harvest of encountering this prayer in its mature abundance and gleaning the fruit in its proclamation.

This book offers a thorough revision of the commentaries first presented in The Tablet from March 2006 – September 2007. The translations have been submitted to the review of Rev. Reginald Foster. The book has been augmented with images from the ambo of Santa Sabina, Rome, with explanations.

Recovering what was lost
Homily on the opening prayer of the Fifth Sunday of Easter
by James G. Leachman OSB

By mutual participation
Homily on the opening prayer of the Sixth Sunday of Easter
by Daniel P. McCarthy OSB

How to Serve Better, Not How Better to be Served
Homily on the Prayer over the Gifts of the Ninth Sunday of Ordinary Time
by James G. Leachman OSB

Liturgy – Our Offering
Homily on the Prayer over the Gifts of the Fourth Sunday of Advent
by Daniel P. McCarthy OSB

To Mutual Self-gift through Service
Homily on the Prayer over the Gifts of the Feast of the Most Holy Trinity
by Daniel P. McCarthy OSB

♣ How to pray with the church

♣ How to preach from the liturgy

♣ How to compose personal prayers

♣ How the prayers were revised

♣ The intentions behind the liturgical renewal

♣ The living Latin language of the prayers

♣ The sources of the prayers

♣ How the liturgy developed in history

♣ How the prayers are constructed

♣ The sources of prayers used ecumenically

You will be prepared:

♣ to better appreciate your own prayer life

♣ to teach Latin from the prayer of the church

You will move beyond:

♣ The building blocks to consider the larger structures of the prayers

♣ The difficulty of translating liturgical texts

♣ The living history of liturgical prayer

Enrich your Lectio divinaor prayerful reading by developing your prayer and seeing the scripture within:

• Lectio: The proclamation of the scriptures

• Meditatio: Silence after each reading, the homily

• Oratio: Prayerful response to the readings in the Psalm and prayers of the assembly

• Contemplatio: Appreciation of the dialogue

PREACHING FROM THE PRAYER

Visit the Monastery Gift Shop in person. We accept Mastercard and Visa.

Fr Daniel P. McCarthy OSB, is a monk of St Benedict’s Abbey, Atchison, Kansas. Having just completed his doctorate at the Pontifical Institute of Liturgy, he now teaches and writes in Rome. He is the author of two series of weekly commentaries published in The Tablet, one on the collects (2006-2007), the other on the prayers over the gifts (2007-2008). He is co-director of the DREI project and co-editor of the series Liturgiam Aestimare : Appreciating the Liturgy.

Fr James G. Leachman OSB is a monk of St Benedict’s Abbey, Ealing, London, who teaches and writes at the Pontifical Institute of Liturgy, Rome. He is assistant editor of Ecclesia Orans, co-director of the DREI project and co-editor of the series Liturgiam Aestimare : Appreciating the Liturgy. He writes on the Liturgy of the Church of England and the theology of Rite of Christian Initiation of Adults. He edited the volume The Liturgical Subject: Subject, Subjectivity and the Human Person in Contemporary Liturgical Discussion and Critique.

Bosco Peters gives this first review of the book.

On the Series in The Tablet:

For safe keeping, here is the preview for the video given in full above: