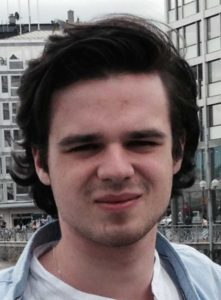 Harrie Lyons is a welcome addition to our faculty for the Latin language. He is an enthusiastic and self-motivated student of languages: Latin, Greek, Semitic languages, German and Italian. His personal study of language has led Harrie to a method similar to that developed by Reginald Foster. Harrie will teach from a draft version of Ossa Latinitatis Sola: The Mere Bones of Latin, which presents Reginald Foster’s method developed while teaching hundreds of students in Rome while serving as the personal Latin secretary of four popes. The book is due out in October and is available for pre-order.

I am a dedicated Latinist with a passion for the Roman tongue in every stage of its history, from the early Roman playwrights up to mediaeval sequence and all of its expressivity, from the philosophical subtleties of scholasticism to the beauty of Virgilian verse. It is precisely this tradition that makes Latin so great, and I want to connect students with this tradition as quickly as possible. In this way, learning the language becomes meaningful and enjoyable to the student.

Harrie is completing a BA at Heythrop College, London, with specialisations in Semitic languages and Italian literature.